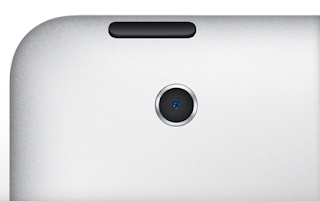 Although the details of the iPad 2's rear camera are still vague, Apple might have created the first digital camera in history that has a higher-resolution LCD display than the camera's sensor!

All we know so far is this tidbit from Apple's site:

Back camera: Video recording, HD (720p) up to 30 frames per second with audio; still camera with 5x digital zoom

We can infer from this that the rear camera sensor is capable of at least 1280x720 pixel resolution. However, it's reasonable to assume that still photos will be cropped to 960x720 (like the current generation iPod Touch) to make them the ratio common for digital photos (4:3).

If that's true, then the iPad will have a higher resolution LCD display (1024x768) than the photos it takes (960x720). This is almost certainly a first. Camera sensors have always had a much higher pixel density than LCD displays. The iPhone 4's display might be impressive at more than 300 pixels per inch, but even the first consumer digital camera sensors had much higher pixel density than 300dpi.

Are the photos taken with the iPad 2 going to display with black bars at the top, bottom, and sides? Normally one needs to dramatically downscale digital photos to display them on the LCD of the device that took the photo (I can't even display full-resolution photos from my iPhone 4 using my 27" Apple Cinema Display).

Apple are certainly pioneers in digital photography, but in this case that's not a positive thing.
Posted by Jack DeNeut at 3:16 AM

Being able to record movies at 720p does not mean that you are limited to 720px for still pictures.

This is quite possibly the dumbest thing I've ever read. the iPad isn't a digital camera with an LCD, it's a computer with a webcam. Most webcams have a lower resolution than the screen they display on.

@Gregory The camera on the *front* of the iPad 2 is a webcam. The rear camera takes HD video, faces *away* from the display, and can thus be only be described as a point-and-shoot pocket camera.

@Kevin Of course you're right in the general sense that a camera that shoots HD video (like a Nikon D90) can take much higher-res still photos. But I fear that in this specific case the iPad 2 will take only 960x720 photos.

Would love to wrong on this, and find out that the iPad 2 can take better stills than 960x720.

I have to agree with Gregory and Kevin here.

You are almost certainly not going to be limited to 960x720 for photos on the iPad2.

The iPhone 4 for instance takes stills at 2592x1936 pixels and I expect that the iPad 2, likely featuring the same backside lit camera as the iPhone 4 will do the same. Also the camera application appears to have a digital zoom feature too, which wouldn't work too well with only 720px tall images.

I don't see any evidence that Apple has made a step backwards here at all.

While a shame that a higher resolution camera was not included, I don't think that it will make much difference. If anything it made the device cheaper for us.

I for one would not use it to take important photos... it's hilariously huge for an all purpose camera. It might of been cool in a plane, if your point and shoot was out of reach, to take a nice out of the window shot. (That's assuming you can fit it in the window). But you can buy a cheaper more portable camera if your interested in taking photographs at say a party, or on a trip. Oh, and your less likely to get mugged for it. :)

But I guess there may one day be a world where everyone is hauling around a giant 10" lcd screen to take family vacation pictures.