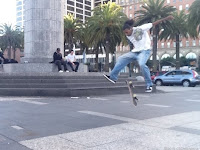 CNET has posted a gallery of photos taken with the iPad 2 rear-facing camera in downtown San Francisco. Not very impressive, but I was surprised that the image sensor was fast enough to get this shot of a skateboarder in mid-air.

PCWorld ran more comprehensive tests, and also tested the iPad 2 alongside the Motorola XOOM and the Samsung Galaxy Tab. You don't need a trained eye to tell that these two Android tablets beat the pants off the 0.7 megapixel rear camera in the iPad 2.

There's no getting around the fact the the back camera in the iPad 2 is sub-standard for 2011. Even the mediocre 2 megapixel shooter from the original iPhone, which is now four years old, would have been better than what Apple put in the iPad 2.

What I haven't seen yet, and what is more important for Nelso's data collection efforts, is a shot taken with the back camera outside in bright sunlight. I'll test that as soon as I get my hands on an iPad 2 later this month.
Posted by Jack DeNeut at 11:08 AM