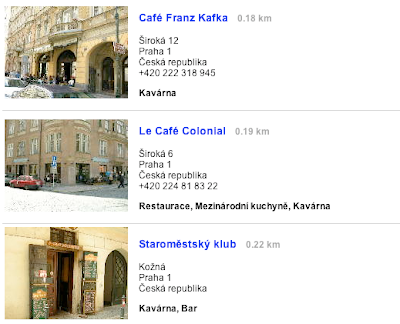 A search for cafes in Prague on Nelso.cz 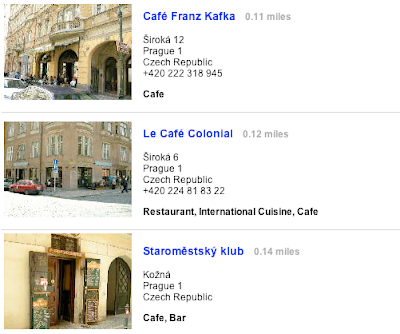 A search for cafes in Prague on Nelso.com

We're always looking to perfect the localization on the Nelso sites, and to that end we've made a small tweak to the way we display distances on the Nelso sites (see above). If you are using Nelso.com, which is aimed at U.S. users, you'll see distances displayed in feet and miles rather than meters and kilometers. This is useful because despite the spread of the metric system throughout the world, most Americans don't have a good feel for metric measures of distance.
Posted by Jack DeNeut at 1:03 PM No comments:

I may or may not give a presentation at this BarCamp. I didn't present at BarCamp Berlin last month, and sorta regretted not taking that opportunity.

If you'll be in Copenhagen on these dates, leave a comment below and maybe we can meet up.

Our most popular U.S. business listing is a typo 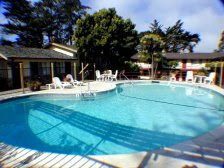 Looking through the Google Analytics stats for our English-language site, I was surprised to find that the most visited U.S. business listing on Nelso is a small bed and breakfast in Carmel-by-the-Sea, California called Svendsgaard's Inn. I found this surprising because it is very hard to rank for hotel (or any accommodation) keywords on Google if the search is in English. These listings are dominated by large established sites like TripAdvisor, Hotels.com, and Expedia, and we don't put any effort into trying to rank for such competitive terms.

So I went to Google and searched using the keywords that brought people to the Nelso site for this business listing, and there we were, three of the top ten results for this little inn in northern California (Google Map).

Why would we rank for this particular place? It took me a few seconds, but I quickly realized that it was common for users to search for "Svengaard's Inn", rather than the correct spelling of "Svendsgaard's Inn", and that this same misspelling was in our database.

Now, I've heard of people doing this - putting misspellings and common typos on a web page just to attract typo traffic from Google - but we've never tried that ourselves. This little accidental experiment, however, shows that there might be something in this. I wonder how many typos are entered into Google by non-Czech speakers when searching for businesses in Prague. Probably quite a few, as the Czech language is very challenging for a non-native speaker.
Posted by Jack DeNeut at 5:34 AM No comments:

Although the current version is just a draft, and the translation still needs work, we have launched a version of Nelso in Swedish at Nelso.se. Later this month (November 2008) we'll start photography for Malmö (across the bridge from Copenhagen), and then early next year we'll start photographing Stockholm in earnest.
Posted by Jack DeNeut at 9:29 PM No comments:

Add Nelso business information to your TomTom GPS with one click

We've added what we hope will be a useful feature for some of our users - the ability to add the details for a business in the Nelso database to your TomTom GPS device with one click.

For example, you'll now find buttons that look like this:

on every business detail on the Nelso sites (clicking on the link above will add a 7-Eleven in Copenhagen, Denmark to your TomTom).

If you have a TomTom GPS, please try out the new feature and leave your comments on this post.
Posted by Jack DeNeut at 5:57 AM No comments: