We want to test Google AdManager, so we're giving away free ads on Nelso

Nelso has just started testing Google AdManager, and to help us get a better feel for its capabilities (e.g. what does "deliver as quickly as possible" really mean in AdManager?), we've decided to give away free advertising space on Nelso to anyone that sends us a properly formatted ad.

Nelso gets a lot of traffic by operating in more than 10 languages, so we'd also like to see some ads that are not in English (but ads in English are also fine). We're using a somewhat unusual ad format, based on the format Yelp uses for category sponsorships. The ads run at the top of the page, and are 915x35 pixels. You can see an example of this format here.

Send your 915x35 pixel creative, and the URL you want for click-throughs to ads@nelso.com and we'll get your ad up as soon as we can.

We of course won't accept every ad (no adult themes, illegal activity, etc. please) and we can't guarantee how many impressions you get (that will depend largely on how many ads we get), but you can't beat the price: free.
Posted by Jack DeNeut at 3:09 PM No comments:

Top 20 Most Popular Businesses in Denmark

Based purely on page views, these are the most popular businesses in Denmark on Nelso:

Posted by Jack DeNeut at 1:34 AM No comments:

Top 30 Most Popular Businesses in the Czech Republic

Based strictly on page views, these are the top 30 all-time most popular businesses in the Czech Republic on Nelso:

Posted by Jack DeNeut at 1:15 AM No comments:

Over the past few months, Nelso has been researching the ways that businesses are using Twitter, and we've compiled a list of over 5000 businesses on Twitter (this list was prepared by hand, so we've verified that these are all real businesses).

After looking at thousands of Twitter business accounts, it became apparent that many businesses are not using the service efficiently, and so we've put together a short list of rules you should follow if you are running a business and are on Twitter. If you run a small or medium-sized business (SMB), and you're not already on Twitter, see Rule #1.

With the possible exception of email, Twitter is the easiest to use communication and promotion tool for businesses. It takes only a few minutes to set up an account, and once you have set up your account, you never need to visit Twitter.com ever again, if you don't want to.

Set up text message (SMS) capabilty for your account under "Settings->Devices" and then all you have to do is send a text message to 40404 to update your status on Twitter (an update is also often called a "tweet"). Of course, we'd recommend logging in to the website (or using one of the many Twitter desktop or mobile clients) to track replies and see who's following your account, but you can effectively promote your business on Twitter using nothing more than text messages.

Rule 2: Make sure your profile is complete 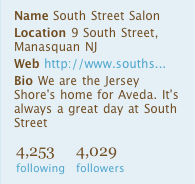 We're surprised that we even have to include this as one of the rules, but we were amazed at the number of business accounts we found on Twitter that, while active, lacked even basic information about the business. It's not uncommon to find a business account (like this account for the Strongbox Lounge) that don't list a location, website, or any other details about the business. It took us a while to figure out "STRONGBOXLounge" was the account for the Strongbox Lounge in Philadelphia.

Name: Include the full name of your business. This doesn't need to be the same as your username on Twitter.

Location: Be sure to provide a location, and be as specific as possible. Most commonly, we see a location like "New York City", but why not include your full address in the "Location" field (I'm assuming your business is not in a secret lair below Manhattan)? If I ran the applestoresoho account, I'd update the location to 103 Prince Street, SoHo, New York, 10012. No need to make your customers work harder to find your business.

Web: If you have a website for your business, include it here (remember to include the "http://" part). Again, this seems obvious, but we found many business accounts where the business had a website, but for some reason didn't include it on their Twitter profile.

Bio: Take a few seconds and tell us a bit about your business. You only get 160 characters, so this isn't an essay question. If you have a telephone number, think about including it in your "Bio".

Although Twitter tends to be rather informal, try to keep your updates related to your business. It's fine to throw in the odd off-topic update (e.g. "Go Mets!"), but those kind of updates should be infrequent. Twitter users will be following your account to find out about your business, so if you want to tweet more often about personal stuff, open a separate Twitter account.

Rule 4: Provide context in your updates

As we said in Rule #1, updating your Twitter account is easy, so remember to update regularly. During our research, we found many accounts that hadn't been updated in months. Other users following your account will often stop following if you don't update regularly, and even worse might assume that you are no longer in business if they don't see any activity on your account for an extended period. Get in the habit of updating your Twitter account at least twice a week, and ideally once a day.

However, don't update your account too often. Flooding your followers with too many updates is a sure way to lose followers.

If you follow the rules above, you'll be well on your way to promoting your business effectively on Twitter. Of course, there's much more to using Twitter than just following these rules. You'll get even more out of Twitter if you monitor @replies to your account, and if you follow some other users rather than just having them follow you. You might also want to follow other businesses in your area, or businesses in your field in other cities to see what they're up to (you might be able to find some of them in Nelso's Twitter Directory).

If you are a business on Twitter, but Nelso hasn't found you yet, send us a tweet and we'll include you.
Posted by Jack DeNeut at 3:25 PM No comments:

Garbage In, Garbage Out: Why Scraping Doesn't Work for Local Search

As we've mentioned before, there are three main (non-exclusive) ways to collect data for local search: 1) license a database from a third party, 2) collect it yourself (I'll include user generated content under this category), or most commonly, 3) use a web scraper to get data from other sites.

We've tried scraping ourselves in the past (yes, it's perfectly legal), and initially populated our New York listings this way. However, the quality of the data from scraping is so poor that this has actually created more work for us than collecting the data ourselves, as we now have to go through these listings by hand and remove all the junk from our database (incorrect data, businesses that closed years ago, businesses that never existed, etc.).

A case in point: Angeno's Pizza in Maple Grove, MN (my local pizza place while growing up) closed years ago. We marked it as closed, but Google still shows it as open, as does Yahoo Local. If you can't trust the two largest sites on the internet, who can you trust?

The problems with incorrect data become clear if you take a look at a search for the address of the Pink Floyd Cafe in Prague.

At some point, someone at some local search or travel site entered the address of Pink Floyd Cafe incorrectly as Americká 18 (it's actually 16), and other sites either copied this data manually, or (more likely) by way of a web scraper. This error then propagated through the internet, and now there are just as many references to the incorrect address as there are to the correct address. Anyone looking at the Google search results for "Pink Floyd Cafe" in Prague might reasonably conclude that Nelso has the wrong address. Even a sophisticated web scraper would have trouble contending with this kind of contradictory data.

We even fell into the same trap ourselves, and almost changed the address to #18 (our manual data entry process shows us references to the same place on other sites). However, if you look at the photo (click through for a very high-resolution version), it's clear that the address is Americká 16, not Americká 18.

The lesson we take away from this is that it's best to collect our own data, and ideally to back up that data with a photograph of the business. This of course doesn't mean that our data is always correct, or that we don't occasionally show closed businesses as still open. But because we show the date of the photos to all users of the site, we can with certainty say that Kolkovna was open for business on July 8, 2009, and at the address we display on the site.
Posted by Jack DeNeut at 12:43 PM 4 comments:

Below we've included a screenshot of the crawl stats for Nelso.com, taken from the webmaster interface at Google. As you can see, the page load times for Nelso.com have improved steadily over the last 90 days, and now average a little under 700 milliseconds. 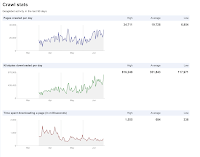 OK, maybe that's three questions. But you get the idea.
Posted by Jack DeNeut at 10:35 AM 3 comments: