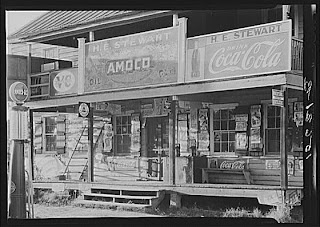 Nelso.com has been working on-and-off over the last six months integrating Twitter business accounts with our core local search site. We've collected a large data set, and we thought it might be interesting to do some analysis of this data to see how small businesses are really using Twitter. We've not seen these kind of concrete numbers elsewhere, so our readers might find them useful.

About the Data Set

The data set we analyzed consists of our database of more than 2,000 businesses in the United States using Twitter (we have data for countries other than the U.S., but our U.S. data set is the most comprehensive).

Because Nelso.com is a local search site, these are all businesses that are included in Nelso's regular local search listings. They are businesses that one might actually visit - always with a physical address, and most open to the public. There are no home-based "Get 1000s of Twitter followers every day!" "business" accounts in this data set. Although there are some major multinationals in the data set (e.g. @Starbucks, @dominos), over 90% of the businesses included are single-location, independently-owned entities. Every one of these business accounts was reviewed by hand to make sure it was suitable for a local search site.

The businesses are located in small towns and major cities, from Anchorage, Alaska to Key West, Florida and everywhere in between. They represent more than 100 business categories, from restaurants and bars to dentists, plumbers, and bookstores.

Although we can't prove that this data set is truly representative of all businesses using Twitter in the United States, the size of data set, the geographical distribution, and the large number of business types gives us confidence in our conclusions.

Of course, you're free to search the entire database at tweet.nelso.com. If you are more visually oriented, you can see the entire data set on this interactive map.

Level of Activity and Abandoned Accounts

First the bad news. As you can see in the chart below, a significant portion (18%) of businesses have not posted an update to their account for the last 30 days. 28% have not updated in more than 14 days, and 37% have not made an update in the last week. As some of the "no post in the last 14 days" accounts are not even a month old, we think it's safe to say that at least 20% of all business accounts in our sample set have been abandoned.

Although it's impossible for us to review every business account and attach a score to their use of Twitter as a communication tool (rather than purely as a way to broadcast messages), we can run a couple of simple tests.

Of all the tweets by U.S. businesses over the last 30 days:

Having too few followers is highly correlated with abandoning an account - a quick perusal of likely abandoned accounts indicates that a business needs at least 100 followers to remain active on Twitter.

If you have any questions or comments, or have an idea for additional analysis we could do on our data set, use the comments section below.
Posted by Jack DeNeut at 5:44 PM 1 comment:

We've got a big post coming tomorrow with lots of data gleaned from our directory of businesses on Twitter, but as an appetizer here's a list of the most active business accounts we've found so far. The number in parentheses is the number of tweets by these businesses in the last 30 days.

A tale of two pizzas: Sbarro NYC vs. Sbarro Prague

While in New York in June photographing businesses for Nelso, I was walking down 34th Street and came across a Sbarro. Knowing that there are now Sbarro locations in Prague, I decided to stop in for a slice to see how it compared to the pizza they serve in Prague.

While eating, I tweeted about it, thinking that the author of a popular food blog in Prague might be interested in such a head-to-head comparison. However, I had to admit that I didn't really remember exactly how the Sbarro pizza in Prague tasted, and so would need to try the Prague version again before rendering a final verdict. 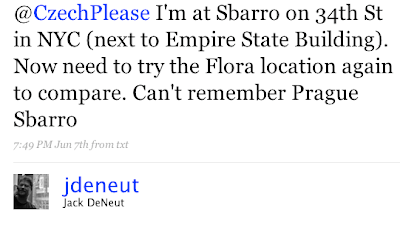 Soon after, I was back in Prague, and headed over to the Sbarro location in the Flora mall to complete my taste test. I ordered the same thing I ordered in New York (a slice of pepperoni), and added a slice of deep-dish because I couldn't resist. I sat down in the dining area of the food court, took a sip of my Diet Coke, and braced myself for the disappointment of eating a lame imitation of NYC pizza in Prague.

But the facts are that the slice of pepperoni pizza I had at Sbarro in Prague was very similar to the one I'd had in New York. So similar, in fact, that I don't think a New Yorker would have noticed the switch if I'd served the Prague version on 34th Street. There can be slight differences pizza-to-pizza and day-to-day even at the same location, but if you still believe that the Sbarro pizza in the U.S. is markedly better than the Czech version you're probably romanticizing the version in the United States.

So, if you're looking for a slice of New York-style pizza in Prague, the Sbarro in Prague might work. Of course, Sbarro is not the best of the NYC pizzas (try this list), and it's a particular style that won't appeal to many Europeans (especially the deep-dish versions), but I'll be back for more when I'm in the area.
Posted by Jack DeNeut at 4:50 PM No comments: