On March 29, 2011, CIO Australia published an interview with Andy Lark, Dell's global head of marketing for large enterprises. In the interview, Lark made a lot of "quotable" statements, among them:

Let's forget for a moment that $1500 seems a little high, even for a tricked-out iPad. The fact is that even $1500 is definitely not too much for enterprises to pay for tablet computers.

What's ironic is that Mr. Lark's statement had already been refuted by an article in the same magazine (CIO) published just days before.

In an article titled "Three Ways Royal Caribbean Has Embraced Mobile, Made Customers Happy", CIO magazine detailed Royal Caribbean's use of iPhones, iPads, and tablet computers to help people on board their cruise ships. I know about iPhones and iPads, but I wondered about the XRiver tablets mentioned in the article. 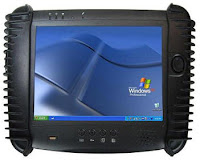 No wonder Royal Caribbean is looking to further integrate iOS into their mobile strategy. There's no 3G coverage on a ship, and they are currently using devices with almost no flash memory, so they can get by fine with the 16GB WiFi iPad. Compared to what they pay now, that's "five for the price of one". Maybe Dell's marketing head meant to say that the iPad is too cheap to sell to enterprise customers?
Posted by Jack DeNeut at 5:00 AM