Inertial Navigation for the iPod Touch 4 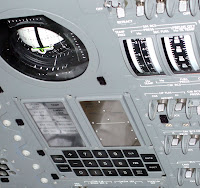 The Apollo Guidance Computer used inertial navigation
Much to our disappointment (we're in the iOS offline travel guide business, after all), the new iPod Touch 4 does not come with built-in GPS.

It does have the ability (as the older iPods Touch did) to get a location using a WiFi signal. It also has a new feature (first launched in the iPhone 4) in that it contains a gyroscope. Along with the accelerometer, and WiFi as a way to input an initial position, we should now have all the tools required to build an (albeit crude) inertial navigation system for the iPod Touch 4 (some might call this "dead reckoning") . Has such a thing been built yet? I wish I had more free time - I wouldn't mind taking a crack at it myself.
Posted by Jack DeNeut at 1:48 PM