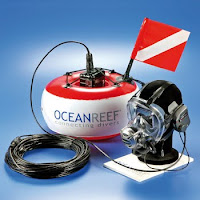 Both my sons have an iPod Touch, and there's no better torture test for a consumer electronics device than to give one to a three-year-old and let him play with it. I think one of the reasons that small children are so destructive is that they don't understand the concept of money, and therefore don't fear breaking an expensive hand-held computer like an iPod Touch.

But my oldest son recently subjected his second-generation 8GB iPod Touch to the ultimate torture test - he tried to continue playing Angry Birds while diving to the bottom of a pool. When he came back up, and I realized he still had it in his hand, I took it away, dried it off with a towel, and watched the display distort (the way they portray a long-distance video call in movies) before it died. I set it on the shelf to let it dry out, thinking it was dead forever.

But after a week, I plugged in the power, turned it on, and it worked. Well, the WiFi no longer works, but other than that it seemed to be no worse for wear after its underwater expedition.

However, I found that the only apps that I could open were the apps supplied by Apple with iOS. No third-party apps would launch (they quit after the splash screen) - not even apps that don't use the WiFi connection. I don't see the WiFi as being the problem, because as you can see from the video below, even Apple-supplied apps that require WiFi (e.g. YouTube) launch without problems on this submarine iPod.

The answer to this mystery is obvious: Apple has a secret API in iOS that allows apps to work underwater. And why does this API exist? I can only assume that the Simpsons writers have inside info, and Steve Jobs really does run Apple from an underwater lair on the ocean floor.

I demand that Apple make this API public. We could then release an app that would cover not only the land portion of Australia, but could also be used by scuba divers while diving in the Great Barrier Reef (and the off-line function of our apps would be a big bonus here - GPS doesn't work underwater, and getting a cell signal underwater requires some serious equipment).

And speaking of iPods and iOS, Nelso has an ever-growing catalog of off-line travel apps for the iPhone and iPod Touch. You can download our most recent app, an iPhone guide to Barcelona, for free from the App Store.
Posted by Jack DeNeut at 12:00 PM