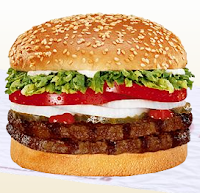 It's been rumored for some time that Burger King would finally start opening restaurants in Prague, but a recent job posting looking for workers for a Burger King restaurant in the food court of Metropole Zlicin leads us to believe that the opening of the first Burger King in the Czech Republic will happen sooner rather than later.

I personally can't wait. I've always liked Burger King more than McDonald's, and it's about time to have another burger chain in the Czech Republic (the only other international fast food chains in Prague are KFC and Subway Sandwiches).

Update: Burger King did finally open in Prague in early December 2008. You can find more info and a map here: Burger King at Metropole Zlicin.
Posted by Jack DeNeut at 2:22 PM