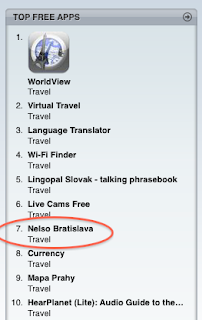 Despite being in the App Store for less than 24 hours, our new iPhone app for Bratislava is already #7 in the Travel category. This isn't much of a surprise - there's not a lot of competition for Bratislava apps currently, and we're the only ones offering a free app.

This is a "beta" release; we still have thousands of business photos to process for Bratislava, and we don't have the app localized into Slovak yet. But we wanted to release it as soon as possible, to judge the demand for an app for a small (Bratislava has a population of about a half million people), less touristy city than Prague.
Posted by Jack DeNeut at 4:46 PM